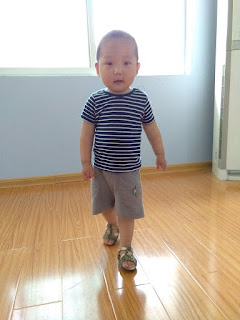 Everyone, this is Judah Lev, or Jude if you prefer. Judah means "the praised one" in Hebrew, and Lev means either lion (Russian) or heart (Hebrew). Jude, our little Lion.

As you can see, he's got quite the little strut going on, and much like his brother enjoys noodles and biscuits. According to the ayis, he is never full and always wants more. One and a half bowls of noodles is quite a lot of noodles to still be wanting more. Sounds like we'll be increasing our Ming Shee order on the reg.

He'll be three in May 2018 (which if you're still following along, you'll realize that's about three or so months younger than Jet...so I'm getting the twins I've  always wanted).

According to the information we got, he's fairly extroverted and obstinate at times. He can share with other kids and likes music. Sound like anyone else you know? He's also pretty independent and although a bit younger than Jet, can do things that Jet is yet unable to do (but we're working on--let's go PT!) 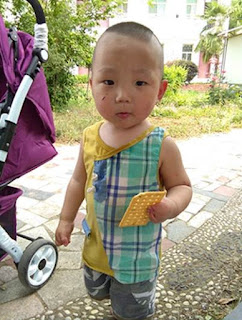 When the ayis pass out biscuits, all the other kids take theirs and run off but he points to his mouth instead. The ayis tell him "no, no, hold out your hands" and he'll slowly hold out his hands to take the biscuit before eating it.

There are obviously a lot of medical unknowns. Derek and I for sure assumed we would be waiting a lot longer and that our son would have medical needs similar to Jet (CHD). That's not actually the case so we'll be venturing out once again into a whole new world. I'm fully expecting to be able to add orthopedic knowledge to my resume. And of course, things may not be all that they seem on paper as well so we are prepared for that too.

If the timing of everything works, Derek will be traveling sometime between January and March to bring him home. Chinese New Year is in the middle of February this year, so we'll see how that effects our timeline. 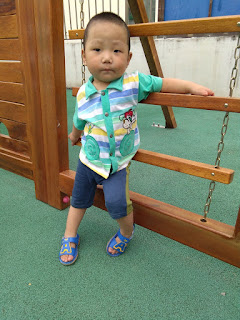 One thing that we're very thankful for that we didn't have the opportunity to do with Jet is that we can sponsor Jude, and by sponsoring him not only will we receive quarterly updates (with pictures) but also ensure that he's receiving adequate food, housing, education, medical needs met, etc. Since travel is a bit farther out than the ten week whirlwind we had with Jet, those updates will be very welcome and of course we will share what we can when we can.

Now, has anyone seen Finding Nemo? I'm assuming sometime in the last fifteen years you have at least once. Remember Nemo's "lucky fin?" Jude has two lucky fins, and he's pretty awesome just the way God made him.
As it turns out, there's a Lucky Fin Project that you can check out for more information.

We'll be keeping his FB Group private a little longer--anyone can join but until we're home, just like with Jet, we prefer to keep things on the private side.

If you'd like to know how you can support us in the coming months, here is a list a things to pray for:

*For a traveling companion for Derek. If you're interested in an all expenses paid trip to China as a glorified luggage carrier, documenter (that's not a word), and support system, please let us know.
*For our finances to come together. We are launching the puzzle pieces again this week and hope to continue on with our Etsy shop. Again, traveling much sooner than expected (although still five-ish months out) is a stretch but we know God will provide what we need, when we need it.
*For Jude and for Jet, as both of their lives are going to be changing pretty drastically in the next six months (and us too, if you think about it).
*For the process and paperwork to go smoothly. There are a million little things that could pop up that we have no control over.

Thank you friends. I have a bunch more photos and videos, but here's one last picture (more available on request): 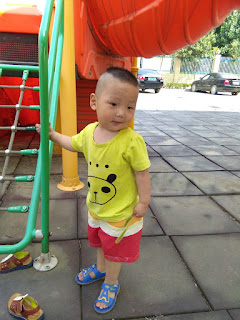