In case you've missed it, Jordan's been in the hospital. (Newsflash!)  Hopefully and most likely he will be coming home tomorrow, provided he can maintain his current oxygen levels on his own without any supplemental. I'm not going to sugarcoat it...this is the fourth time we've dealt with this since August, but by far probably the scariest and the first time he's had to be admitted for it. (To be fair, one other time they wanted to admit him but we said it was unnecessary because we knew what prescriptions he needed and what they were giving. Since we're experts and all.)  And to continue this honesty train, we are growing quite tired of it.

Do you know his typical diagnosis for these breathing issues is the common cold? Something that for you and I is just an annoyance or aggravation is quite serious for Jordan. It's not something that we take lightly or that we joke about (much--we do call him a Special Snowflake, but it's all in love--and he's our special snowflake). We're to the point though that if he gets a runny nose, we immediately start our albuterol and have a game plan in place for the next day (or that day, since it is usually 3am).

Me: What meetings do you have tomorrow?
Derek: I am free between x and y, and would like to try to be at meeting at z.
Me: Ok. I have an appt at qrs but that can be rescheduled. I'll call triage if it gets worse or I'll wait 'til the peds office opens to see if they'll let us bypass ER this time. I'll text you with what I find out.

And scene. Back to bed.

This time, we did get the appointment with the pediatrician, and when we woke up I gave him his prescribed treatment of Pulmicort (twice daily to coat those special lungs). Unfortunately, it didn't help and he got significantly worse--enough that I decided 911 would be wisest thing to do as I can't drive and monitor the backseat no matter how close we live to the hospital (less than five minutes). To summarize, we were admitted within forty five minutes of arriving at the ER and Jordan was given oxygen support as well as his normal breathing treatments (plus albuterol). AND still his oxygen hovered high 80s with 40-60 breaths per minute, while dropping into the 70s when he was upset (and by upset, I actually just mean plain angry).

Now, I know to some of you that seems super serious. And it could be, or could have been. After all, if this is what the common cold does, what would pneumonia or viral bronchitis or any number of more serious lung issues do to him? We know with 99% certainty that his pulmonary hypertension is the cause of this and we could see a significant decrease in these episodes once the required surgery is done. However, at this time, there are other contributing factors as to why that surgery has not been scheduled. (For example, the mitral valve repair will be more in depth than originally planned, and an unrelated issue regarding placing leads for a pacemaker needs to be solved first.)

And yes, this was serious, and scary, and as previously stated, getting old fast. But this past week has put some perspective on that. I mentioned somewhere (facebook? Insta? It all runs together...) that this week has been full of ups and downs. For example, a precious little girl, one of J's "sisters" in China, that we very seriously considered submitting for earlier this week but did not, passed away just a few days ago--the very day another family submitted their letter of intent to adopt her--due to her own heart issues, only one week after her file made it to the USA. Other siblings of Jordan's from his foster home are no longer with us, with their hearts healed and whole with Jesus.

So in reality, what do we have to complain about? Oh goodness, how terrible to live five minutes from the best children's hospital outside Chicago? And an ambulance makes it just that much faster. Oh stars, Jordan's oxygen is in the 80s! Listen, there are heart moms out there that would love for their kids to hit sats of 50. Or even 40. What? We have to wait indefinitely for Jordan's surgery? How inconvenient. We can't schedule our vacation until we know that. There are families who go to sleep every night, wondering if their child will ever qualify for surgery, or if surgery will be able to be done "in time"...or even wake up the next morning. This is not for dramatics, friends. This is real. 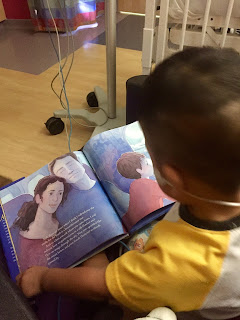 We are blessed. We don't always act like it or show it. I will be the first to admit my frustrations over the past few days haven't been a Christ-like reflection. Our son is healthy and happy. His lungs just work a little harder sometimes, and we have to be extra careful with colds and teething and other aggravations to them, but they are fixable. This is not to say we won't be having a conversation with Jordan's doctor to see what or if something can be done sooner. But we can be patient. (I've been told it's a Fruit of the Spirit...as is self-control...which I did not point out. This is called irony, my friends.) We can be understanding. We can accept answers we may not want to hear...because we all want what's best for Jordan.

Tonight, before I left the hospital, we snapped a picture of one of our favorite books we read to Jordan. He knows it well enough to "read" it himself by now as it's part of our bedtime routine. It's called The Story I'll Tell, and I'm sure I've talked about it before. It tells the story of a family adopting a little boy from China, and the different, adventurous ways they explain how he came home...ending with the truth, because--as the book says--that's a beautiful story too. It also doesn't gloss over the trauma of adoption, and since Jordan can't actually read we improvise some of the ending about his homecoming (see here). I cannot recommend this book highly enough, especially because there are so few books written about boys' adoptions from China. But we know that it's not enough to tell him his history. And right now, there are three verses that come to mind. I know some people claim a life verse, but I tend to go with situational. Life changes too frequently. Right now, it's these:

I have stored up your word in my heart, that I might not sin against you. Psalm 119:11

*This is why we read, study, and memorize God's word.

*God is God. I am not. Plain and simple.

Hear, O Israel: The LORD our God, the LORD is one....And these words that I command you today shall be on your heart. You shall teach them diligently to your children, and shall talk of them when you sit in your house, and when you walk by the way, and when you lie down, and when you rise. Deut. 6: 4, 6-7

*This. This is our task. It is our responsibility to teach Jordan his heritage, to tell him the story of his birth and adoption. But ultimately it's our responsibility to pass on our faith, his heavenly heritage: the story of God's adoption of us with the hope that someday Jordan will embrace that as his own--doubly adopted.  Jordan is little, and doesn't always understand, but he is watching us and our reactions. That's something to keep in our peripheral as we proceed in the future. To remember that, in our earthly perspective, in the scheme of things? These little blips? To check our reactions. People are watching us. And we are thankful for our healthy son, who just needs some extra help sometimes.

Posted by Unknown at 7:40 PM No comments: