How nice that the end of our adoption trip ends on Thanksgiving Day! We are thankful for so many things this year:

-the process of Jordan's adoption being over
-having our financial needs met before we traveled
-Jordan's arrival
-our health
-Jordan's health
-a fantastic team of doctors who care about Jordan, not just as a patient
-our families' health
-our friends here who are also our family
-safe travels to and from China
-family and friends who love us and want to help us when we need it
-a warm house
-not one, not two, but possibly THREE (3) new Christmas trees
-a church family who cares about us
-Derek's job which provides what we need
-.....etc.

But I can tell you, without fail, with absolutely no exaggeration whatsoever in the history of mankind's use of hyperbole, what we were most thankful for in the year of 2016 to date was the wheels of our plane touching down on the runway at O'Hare on June 8 around 1:30 p.m.

That was the longest fourteen hours of our life. It really was.

Let's rewind, shall we?

We departed our Guangzhou hotel around 4:30 a.m. to travel to Hong Kong International Airport via van (estimated arrival time was between 9 and 10). First off, I am not great in the mornings when it's a high stress situation. And I'm not too proud to tell you that when we went through customs from China into Hong Kong and the driver left to use the restroom, I dry-heaved into my purse because that is just how I roll. The fact that Derek opened a pre-packaged breakfast for us that contained hard boiled eggs did not help.

However, we made it through customs, to the airport, through baggage check and customs again and security, and to our gate with time to spare. We hit up the Disney store, bought some McDonald's and possibly something similar to Panera, and waited another hour to board. This was probably the first (and last) flight that we had arrived with too much time to spare! That's not a bad thing by the way--just was not our norm for the trip starting with leaving Peoria two weeks earlier!

We boarded our plane, and thankfully had a middle and aisle seat. However, since Jordan was (and still is) under two, he got to sit on our laps for the flight again. This seemed like a great idea at the time when we purchased the tickets almost a month earlier, but it wasn't. Neither of us slept. Jordan fussed the entire trip, even in his sleep. Unknown to us, he was cutting his very last canine. Had we known that, we would have given him some Motrin or something but hindsight is 20/20! Not to mention, the formula still wasn't agreeing with him since we couldn't find what he had been drinking in Beijing anywhere else. We went through a lot of diapers during that plane ride, but we were thankfully only three or four rows up from the bathrooms.

Derek is the most patient person I know. One might say unflappable even. He is, one hundred percent, without a doubt, the opposite of me in every way when it comes high stress and high tension situations. However, at one point on the flight, not even halfway through (eight hours to go to be exact), Derek pretty much threw Jordan toward me (the only way I can describe it) and said "I can't do this anymore" and got up to walk around. Jordan and I had actually just fallen asleep, so we were neither of us happy to have been woken up, but Derek had reached his limit. Honestly, that is the absolute only time I have ever seen that happen. I truly didn't know if he was going to survive the rest of the trip without a mental breakdown. Seriously. And, even though I wasn't pleased to have a now crying toddler thrust into my lap, and a husband pacing the aisles like a crazy person, I kind of...may have...started giggling hysterically. Not really helpful. (Kind of like I am now, just reliving it.)

But, we made it through, and only by the grace of God. Derek is just now--almost six months later--willing to consider flying short distances again. Like maybe, maybe a two hour flight. We've discussed so many vacations and every single one he has said "we'll just drive the twelve, fourteen, thirty-two hours. That is how badly he wanted off of that plane. And please remember...I'm the one with the flying issues.

So....back to "present." When the plane was almost to the ground, I told Derek that as soon as the plane landed we were going to use our elbows and knees and whatever else God gave us to so that we could grab our stuff and get off of that plane. I also said I don't care if the seat belt sign was still on, once those wheels were on the ground, it was GO TIME. Judge not, lest ye be judged, people. And then...then...the wheels hit the ground! Angels sang, I'm pretty sure.

Unfortunately, we were so gungho about getting our junk together that neither of us were paying close attention to Jordan, until our seatmate (who didn't speak English) handed us a tissue and pointed toward his nose...to point out to both of us that Jordan's little nose wasn't just dripping a little blood but full on gushing. Parenting fail. Also, it was at that point that we realized his diaper was full. Full. So really, we didn't need to do much elbowing to get off the flight. When carrying a toddler covered in blood (did I mention he was wearing a white onesie and that was all?) that reeked like none other (thankfully Derek and I were both wearing all black) people move out of your way quickly.

So no. We do not have a triumphant "We've landed in America! Jordan is an American citizen!" photo to share with you, or him someday. It was not a priority. It may have crossed my mind, but I guarantee it did not cross Derek's. At that point we just needed to find a restroom with a changing table. For those of you who have traveled internationally though, you know you can't do that until you've gone through customs...and in our case immigration. We had been warned this could take up to two hours.

It took us five minutes. Five minutes. Let me say again, five minutes. We were through customs, immigration, and had our luggage within a half hour of getting off of that plane. Unheard of. God surely, surely knew we had reached our limit because I do not think that will ever happen again.

That left us with another dilemma. We were supposed to fly home to Peoria at 8:45 that evening--which would leave us with about seven hours to kill at O'Hare. Uh, no. Neither of us (especially Derek) would be getting on a plane anytime soon and we were prepared to rent a car, even though we hadn't slept in about thirty hours. Not our best choice, but desperate times call for desperate measures. Derek went to change Jordan (and throw away that nasty onesie). Also, just an FYI, in the chaos of a bloody nose, a dirty diaper, and just getting off of the plane we forgot our fancy changing pad under the seat...so Derek had to engineer some sort of way to change Jordan without him catching whatever diseases were in the public restroom in O'Hare. He would like me to add here that the baby changing station in that particular restroom was literally a piece of plywood screwed to the wall. Hygienic. 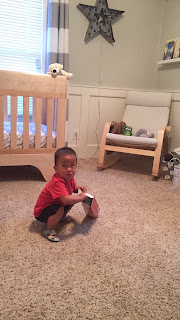 This is when I had a stroke of genius! Derek's parents were headed down to Peoria to meet us at the airport back home! And they had a vehicle with a carseat in it already. BOOM! Done. I called them and they had literally just left their house. Timing is certainly everything! I explained the situation and they were at the airport within a half hour and we were on our way back to Peoria! We are so thankful that's how it worked out. I think they could tell we were in a fog, and also trying to reorganize our timeline like the video camera and whatever friends who weren't at work to meet us at the house instead of hitting us up at the airport that evening as planned. Plus, this was Jordan's first time in a carseat. He wasn't thrilled, but we came prepared with cookies. Somehow, we survived that two and a half hour trip home to our house. There was no triumphant entry. Honestly, I don't think my in-laws know this, (but they will now) but I had reached that point of exhaustion and hunger where I was so nauseated I spent the entire time between Prospect Rd. and Sheridan (so basically two miles from our house) bent over trying not to puke in their backseat. (Surprise! Aren't you glad I didn't?)

It was so nice to be home. It was wonderful to be greeted be family and friends at the house who had prayed for us before, during, and after our trip, who cleaned the house while we were gone, and left groceries, dry cleaning, and meals for us so we didn't have to worry for a few days. We were and are so thankful that they made the effort to meet us at the house, considering the unexpected change of plans. We were so happy to be home with our son. And to sleep in our own bed. (Jordan and I conked out around 7, if not earlier.) We are so thankful for our son, the people who cared for him in China, and the people who helped us bring him home.

But, truly...never have we been more thankful for the end of that plane ride...and day.

Happy Thanksgiving everyone! Love to you all!

To view our adoption testimony that our church for National Adoption Month, please click here. We are so thankful and honored to share how God worked in our lives over the past year in bringing home Jordan, and hope that speaks to your hearts as well about God's love for His children.