In three words, I can summarize everything I've learned about life: it goes on. --Robert Frost. 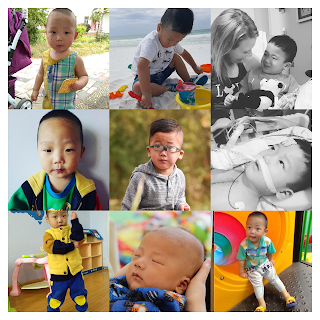 There are only a few hours left of 2017, and it's bittersweet to leave it behind us. Between the first day of the year and today, we've had ups, downs, highs, lows, and all of the in betweens. Like many of you, I found our Top Nine on Instagram to be a refreshingly accurate representation of our year. As Mr. Frost so eloquently referenced, life goes on.

But...sometimes life moved slowly. There were days that didn't seem to ever end, like the day of Jordan's heart surgery, and then the day of his second surgery a few days after. Silent cries because he wanted to be held but there were so many tubes and wires and lines attached that it wasn't possible. Helping him out of the car when we got home after being discharged and realizing the boy who ran down the hall toward the operating room couldn't even walk or talk. The days and weeks post discharge when he would cry and and shake because he was weaning off some pretty heavy narcotics, and we were giving our two year old methadone and Ativan just to take the edge off until he could start to feel like himself again. It's old news for many of you, but it was just yesterday for us.

But, then there were the quick, happy flashes, that happened more and more frequently, like holding our son for the first time after two weeks. Seeing him smile and ask for PomPom. Learning to jump, both feet leaving the ground. Taking our first family vacation ever. Building sandcastles and eating shaved ice and fish tacos and experiencing our first hurricane like true Midwesterners. Getting colds and not ending up in the hospital (except for that one time...). Experiencing the holidays the way they're meant to be experienced, with family and friends.

Learning that we would be a family of four, very quickly. Buying new clothes for another little boy, just a couple months younger than Jordan. Counting the days and realizing that in less than two months from now, Derek and his dad will be in China bringing home Judah. Emails and updates about our newest son, stacks of paperwork and red tape completed just to receive and send off a fresh bunch.

So 2017...was bittersweet. It was fast and slow. There were parts we'd prefer not to relive, parts that we wish would stay forever, and parts that point to a future we can't wait for. We don't make New Year's Resolutions, because why decide to make a change later when we can just do it today? I realize that's a rather lofty and somewhat arrogant sounding statement but it works for us.

If we've learned anything this year, it's for these two control freaks to not hold on so tightly. Again. We've made a number of plans this past year...and not a single one has happened the way we anticipated. Not one. It's almost--but not quite--comical. And we're not perfect at letting go, not by a long shot.

Come now, you who say, 'Today or tomorrow we will go into such and such a town and spend a year there and trade and make a profit"--yet you do not know what tomorrow will bring. What is your life? For you are a mist that appears for a little time and then vanishes. Instead you ought to say, "If the Lord wills, we will live and do this or that." As it is, you boast in your arrogance. All such boasting is evil. So whoever knows the right thing to do and fails to do it, for him it is sin. --James 4:13-17

Does this mean we don't make plans? Absolutely not. We still make plans. We still pray about those plans. We hope those plans will come to fruition. But, we've also learned to be flexible. We listen more to our gut when things don't quite feel right. We aren't in control. We never have been. God is God, and we are not...and when you finally, finally remember that, you can hopefully find comfort in it. So when incidences like unexpected health issues, bills, matches that weren't the right fit, paperwork logjams, or small rodents that tunnel through the backseat of your car happen, we can accept...that was in The Plan. Just not ours.

So there are no New Year's Resolutions here. We have some hopes for what 2018 has in store, but we don't call the shots. We also don't intend to sit idly by and watch life happen. Time doesn't stop for us, life is fleeting, and we intend to be present for every moment, planned or not.

Posted by Unknown at 8:15 PM No comments: 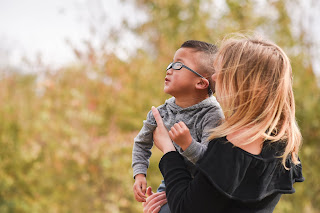 Plus One Day: the day when your child has been home with you one day longer than they weren't.

Typically, it's used as a marker for adjustment and attachment. When you reach it, it's a good measurement for where your family is in your attachment journey. For many, it's indicative of how well-adjusted your child is. To fully erase the damage of being alone, institutionalized, without a family, some experts say this particular day can be when your child will finally begin to feel wholly and completely a part of your family. A Plus One Day is a good thing. Some families even choose to celebrate this day, especially since it only comes once.

In fact, while I've thought about Jet's time with us off and on over the past eighteen months or so, I never actually marked the date, and it was only yesterday that I saw a post on Facebook by someone else who mentioned it and I realized I should count back since surely it was coming up. Well, it actually came and went over two months ago, with no acknowledgement and absolutely zero pomp and circumstance in this house. 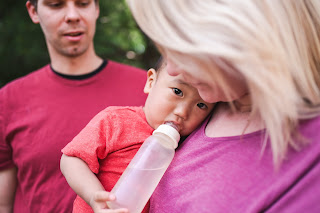 I brought it up to Derek even, marveling at the fact that Jet has been with us for more than half his life. Part of that is due to the fact that he was just barely sixteen months old on our Family Day, which is atypically young, and the other part is because time truly does fly. Ten pounds and nine inches worth of time, actually.

Please, don't misunderstand. These are all good things. I'm thankful that Jet's adjustment and attachment went smoothly. Of course there were bumps in the road, as expected, but overall we're grateful that we have a pretty confident, well-adjusted little boy who we can call our son. Yet we can't help but grieve, to realize this isn't the way it's supposed to be. 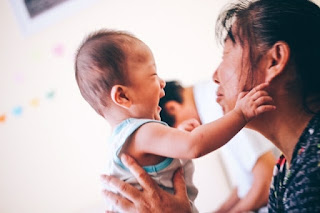 But, that's not how things worked out. His birth family was forced to make the hardest choice parents can face. For reasons we'll never know but will always be thankful for, God orchestrated Jet to be able to receive his lifesaving surgery while still in China. Then, while recovering and up to the time of his adoption, Jet was able to learn to live in a family, a part of a family with a woman who loved him as a son, teaching him important things like how to love and how to be loved in return...thus making his transition into our family as our son smoother than most. We're forever grateful to her for her sacrificial love.

We don't live in a perfect world. We have lots of questions, and never enough answers. But we do know that God doesn't make mistakes. His plan is perfect. He's in control. 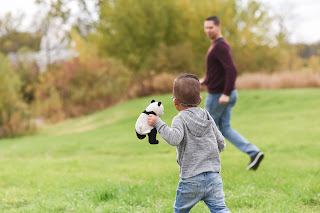 So we forgot Jet's Plus One Day. I haven't even done the math to figure out when it was exactly, because right now, it doesn't matter. What matters is our son, growing up happy and healthy, with his family who loves him. Jet is where he's supposed to be.

Posted by Unknown at 8:43 PM No comments: