Eleven families donating, even more helping, months and hours of prep work and stress and clutter and (let's be honest) a chaotic mess of a house and garage finally paid off this past weekend for the garage sale to help us raise funds for our adoption. I won't bore you with (a lot) of words, but we are thankful for each person who came out and helped--however much or however little, it was greatly appreciated!

(Scroll all the way to the bottom for the grand total, if that's what you're looking for.)
﻿ 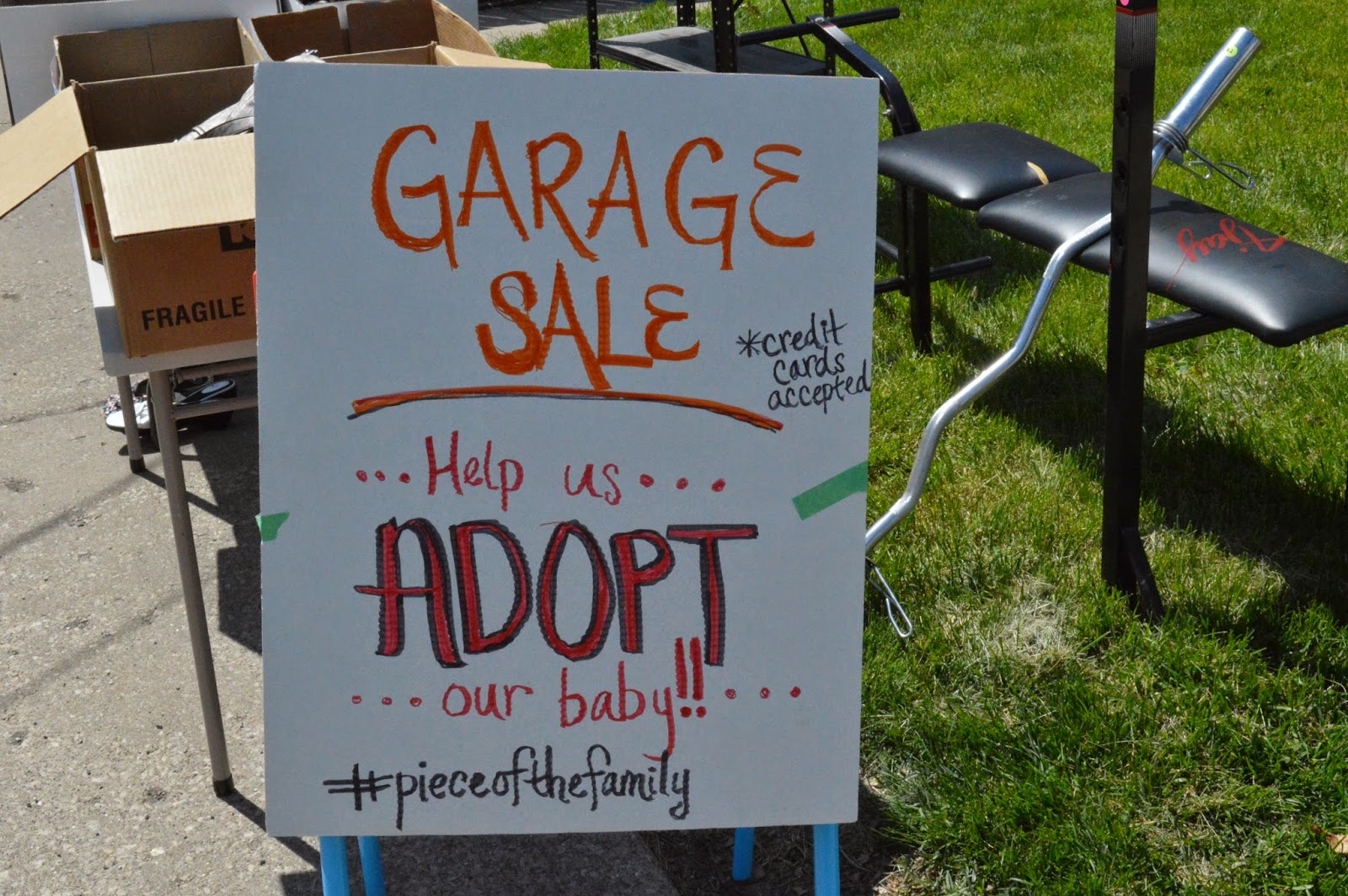 The sign didn't go up until about 10, and even though we were technically not opening until noon on Friday, people were here at 8:15 to shop. I forgot the cardinal garage-saling rule of "If the garage is open, the sale is open."
﻿ 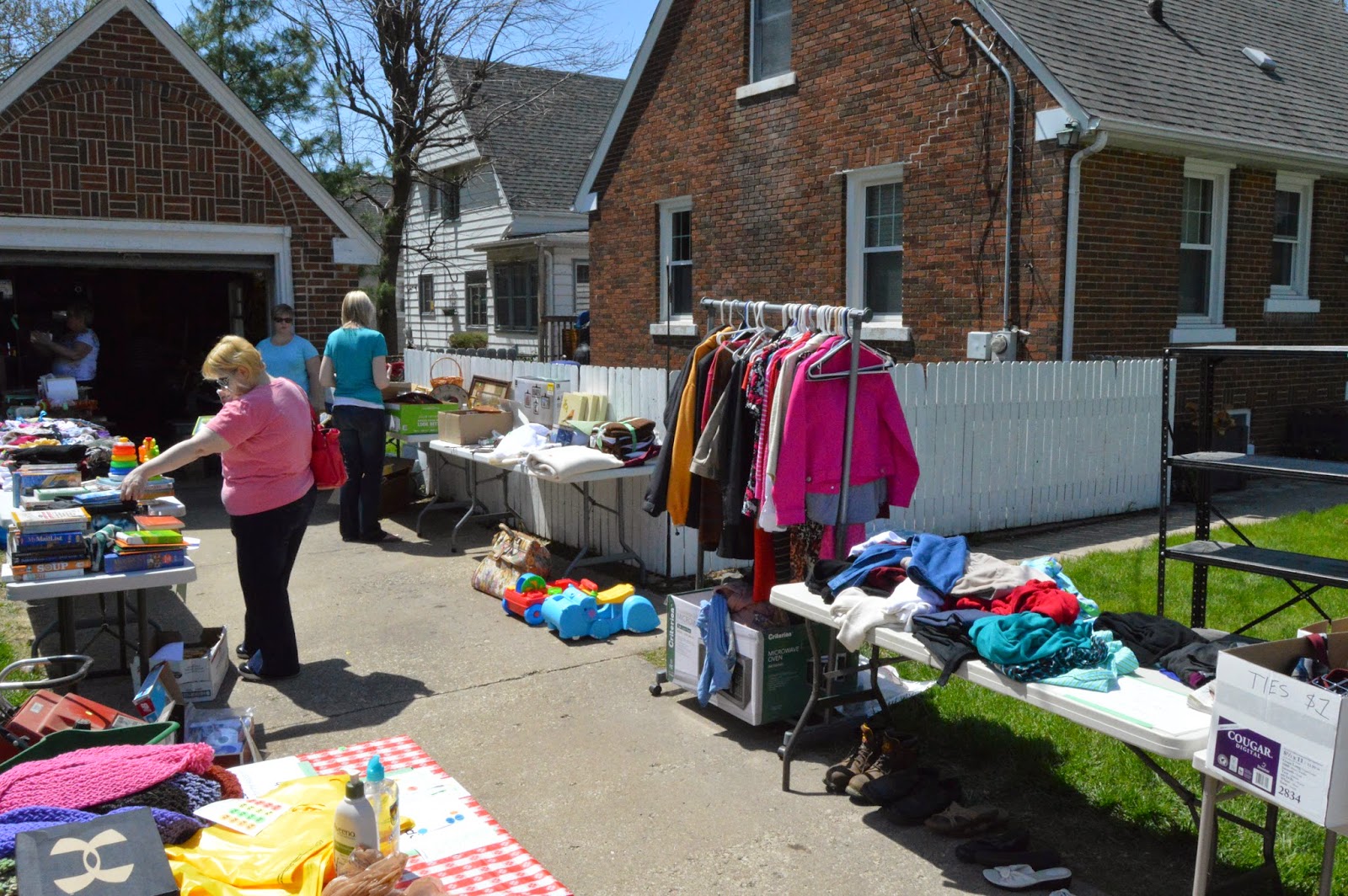 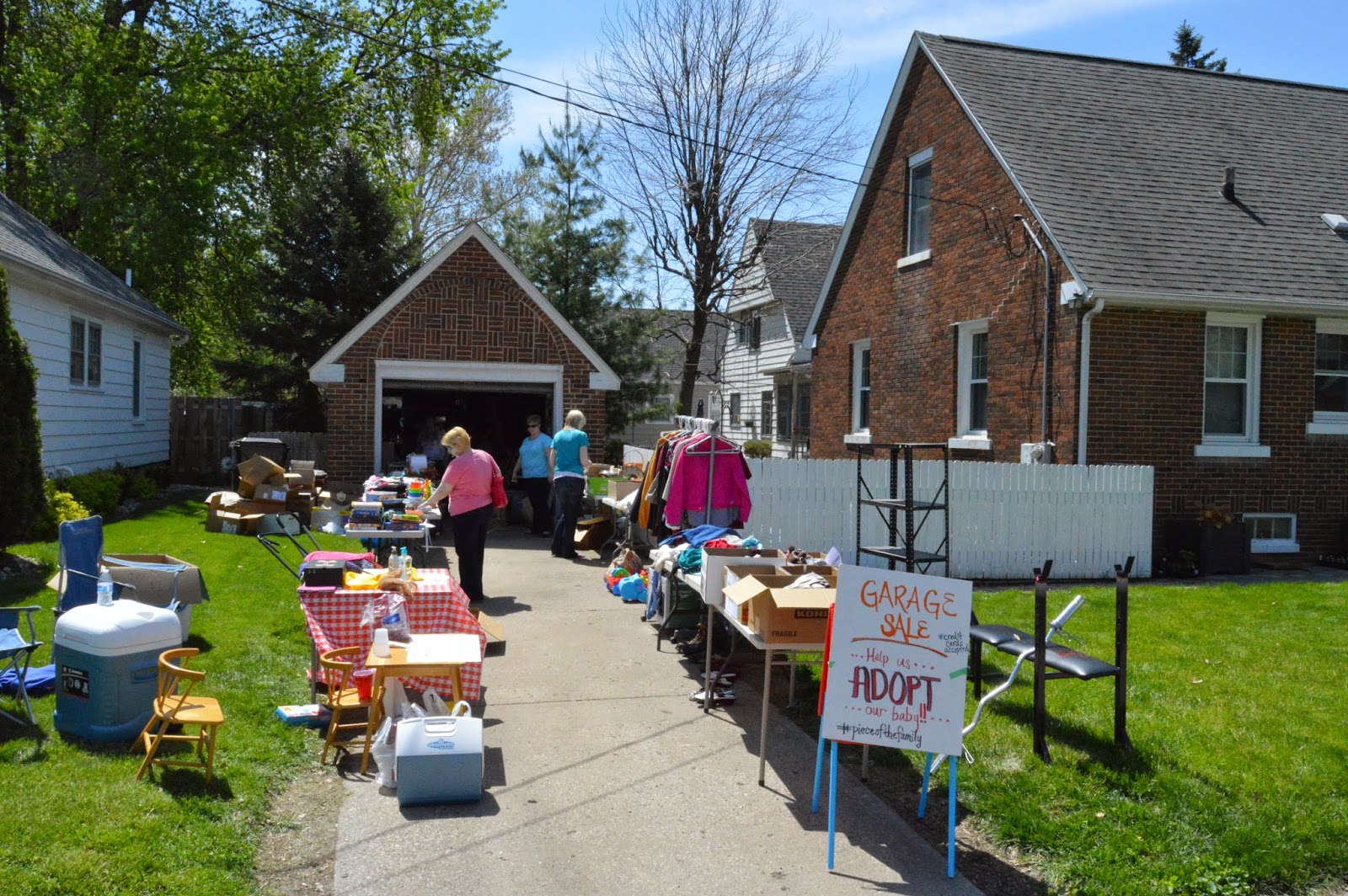 Believe it or not, the above two photos were taken late Friday morning, after a lot of stuff had already cleared out. We were super busy pretty much from the get-go, so Derek was only able to snap a couple of quick photos. 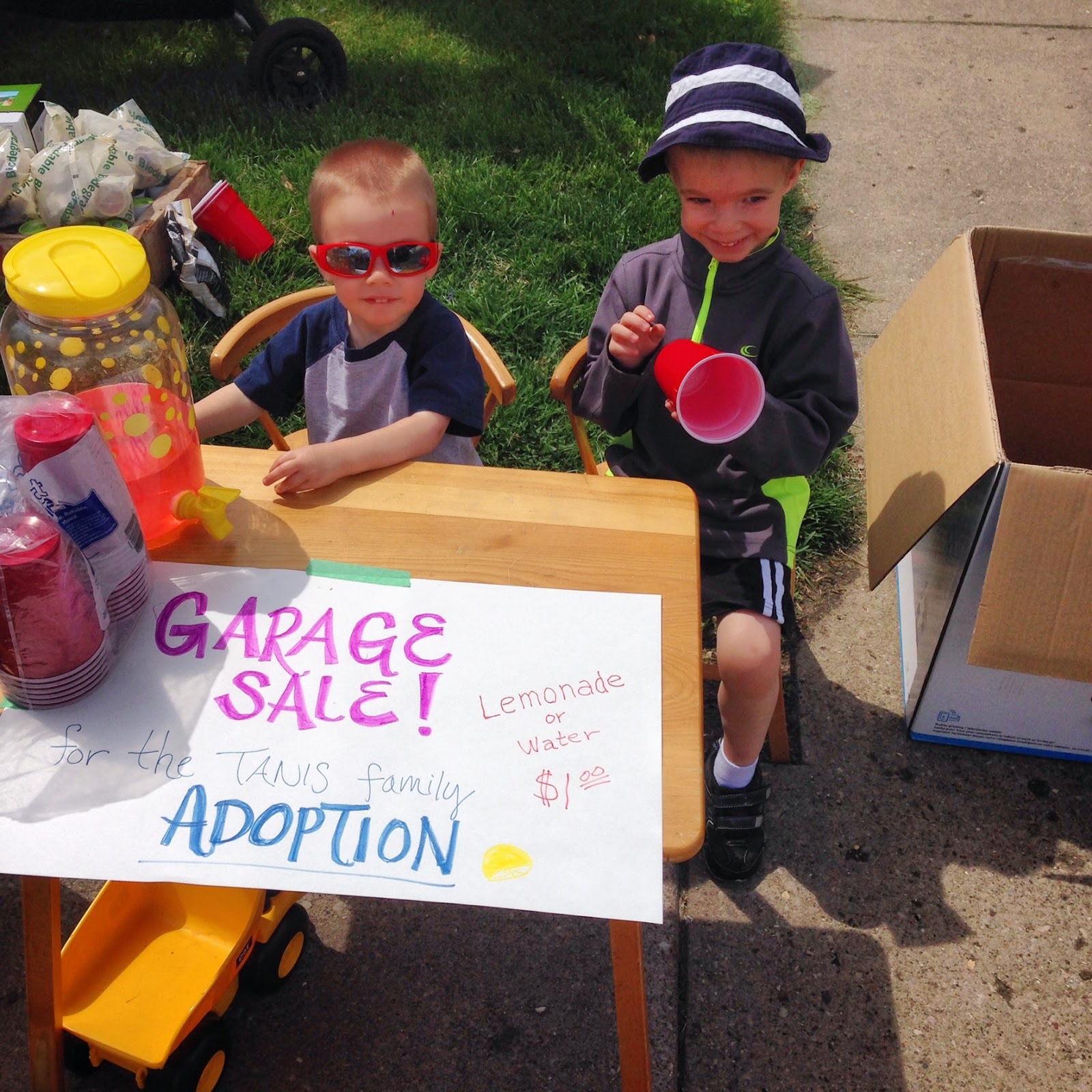 We had some very professional lemonade stand help, who took "no thanks" quite personally. They really moved a lot of inventory! The beautiful sunny weather we had both days helped as well, as it did get quite warm just sitting in the sun. We did finally put a canopy up, which was super helpful! 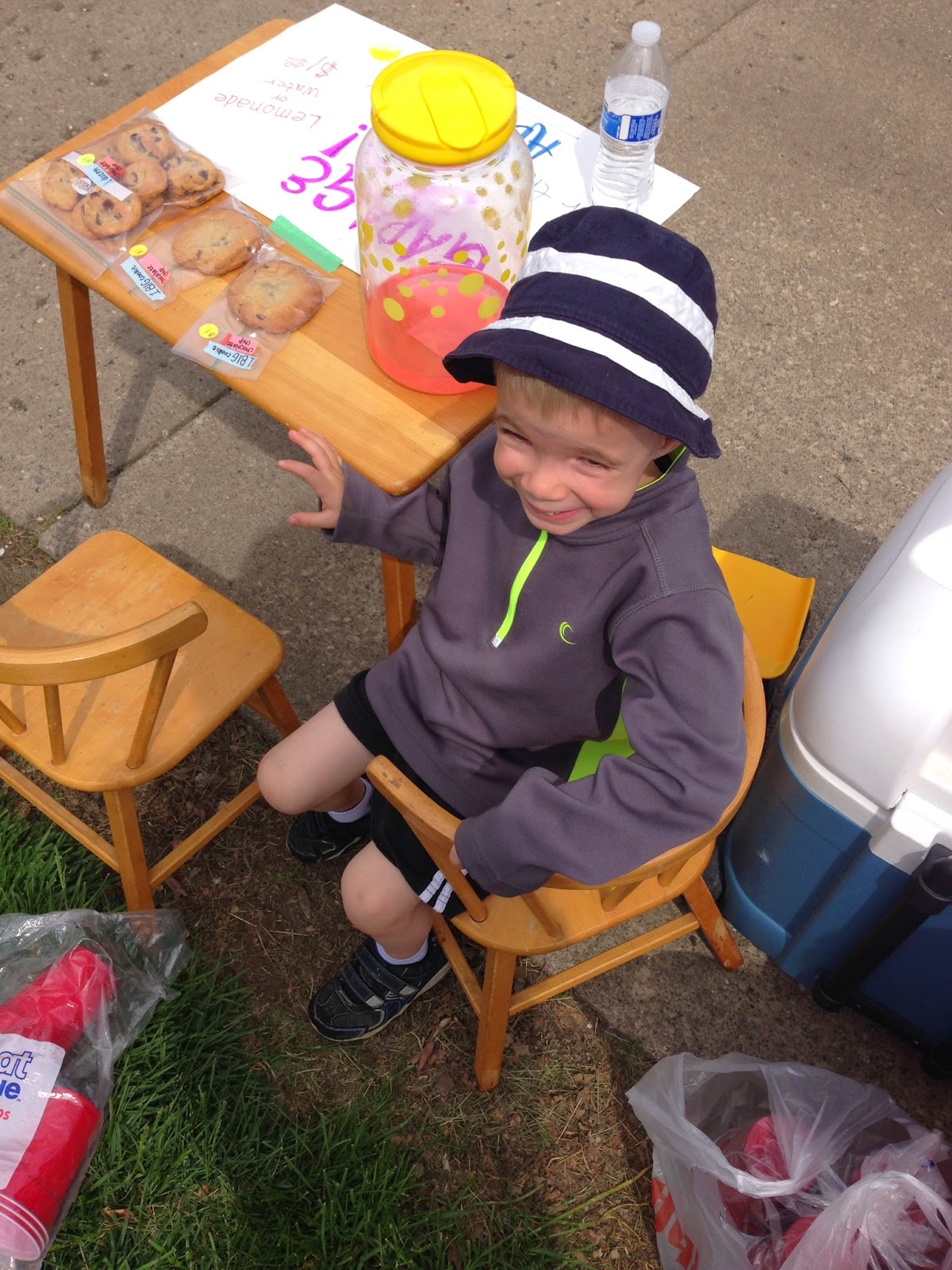 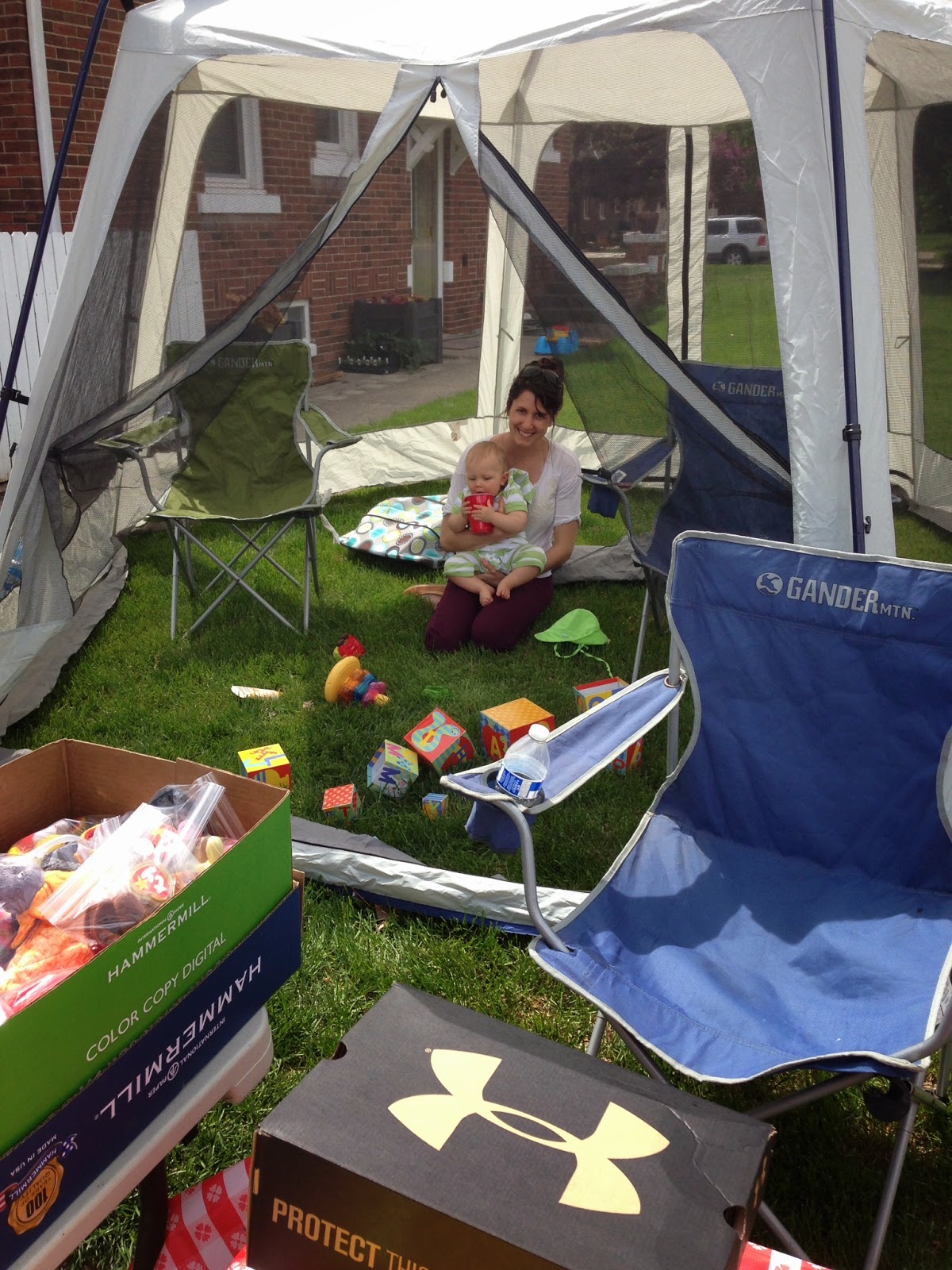 My parents were able to come down for the weekend and got a lot of pricing and other stuff done that there was no possible way we would have had time to do. Plus, they brought an additional two carloads of items to sell, which was awesome! Derek's mom also worked pretty much all winter making scarves to sell at the garage sale too--big hit! 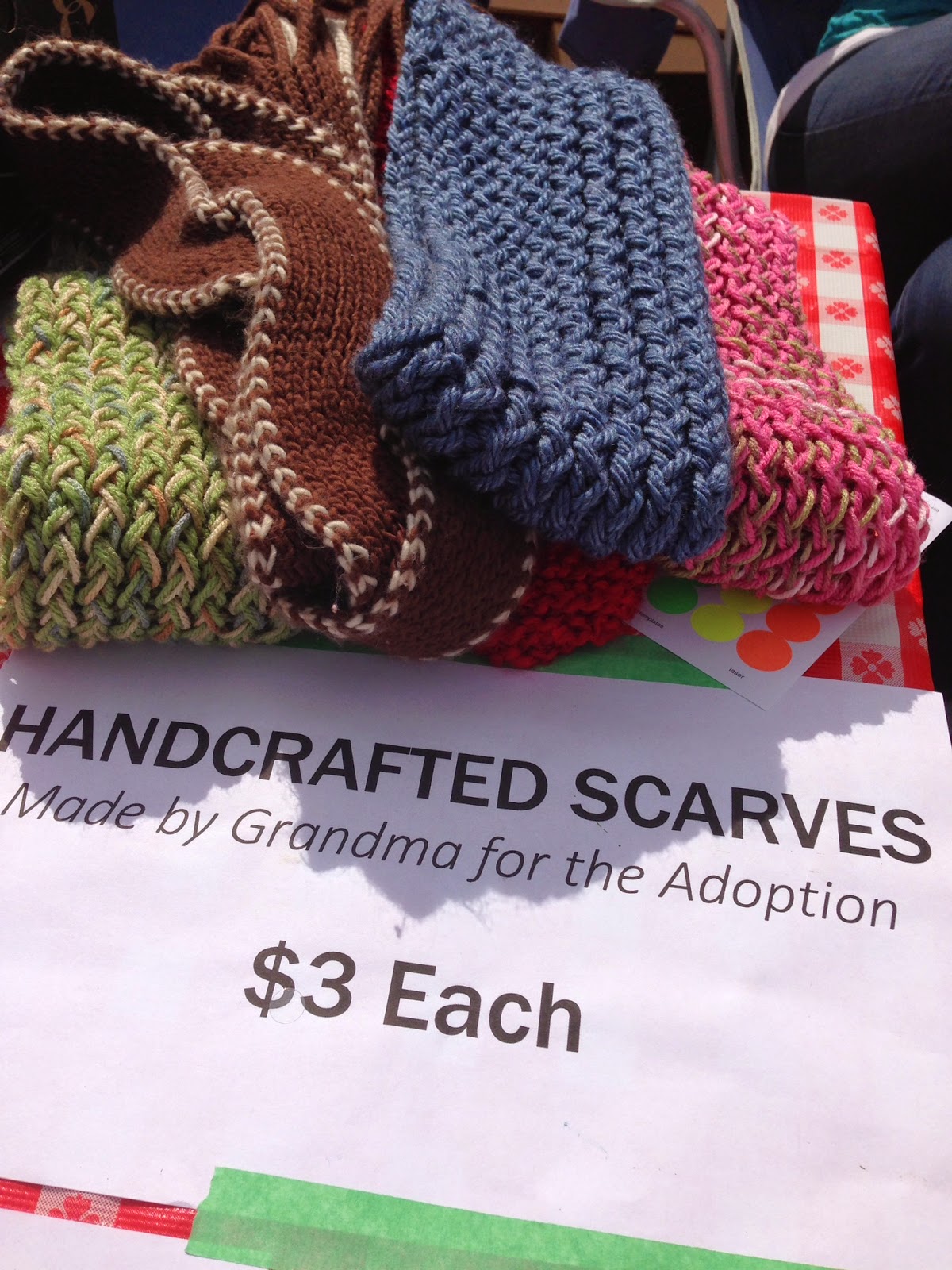 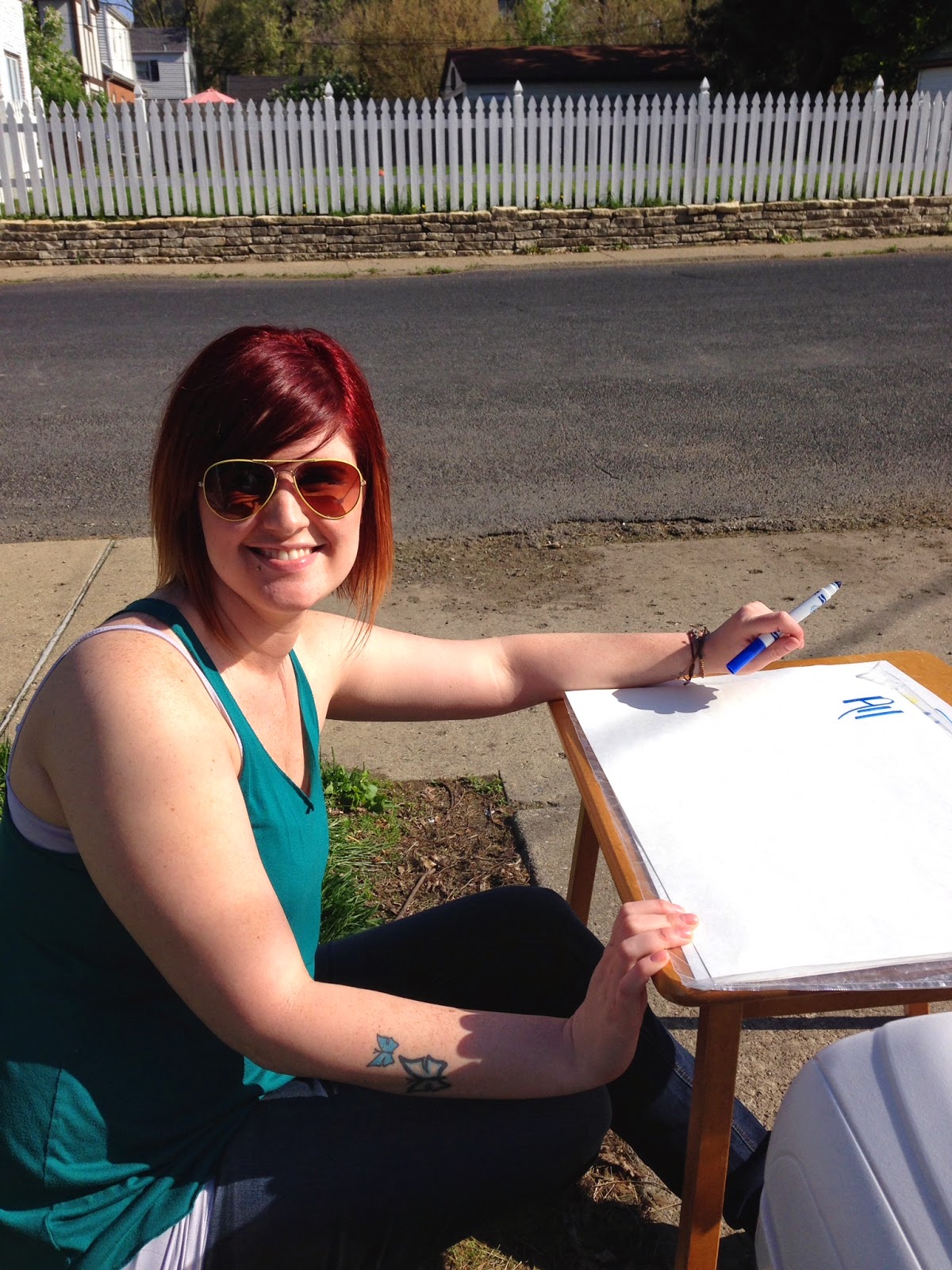 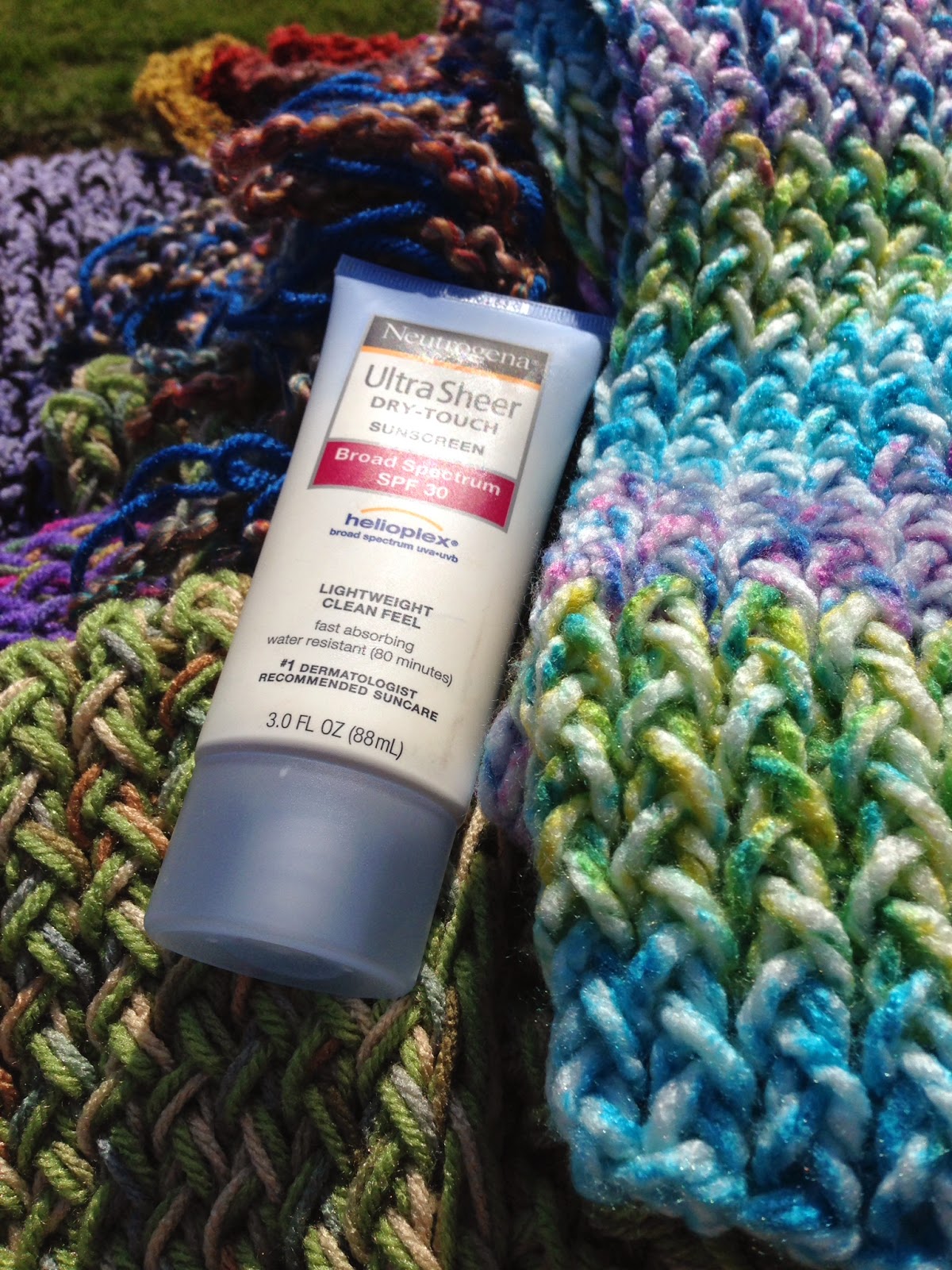 Shana and I were ready bright and early again on Saturday while Derek got coffee, ice, and a few other errands that I can't remember. Basically, sunscreen was a must! Have I mentioned the beautiful sunny weather yet? Perfect day for a garage sale. Fun fact, shortly after we took these photos a man came and bought pretty much all the chocolate chip cookies that my friend Jessica made--to share with his dog.

Friends of ours came by early afternoon on Saturday to help us pack up. Considering the amount that we started with, three (ish) carloads to Goodwill really wasn't that much leftover!

I've said it already, but we could not have done all of this without the help and support from our friends and family. From the bottom of our hearts, thank you for your prayers, your time, your help, and...your stuff. After all was said and done, the final tally (including around $200 in donations) was $1,765! It was amazing to hear how many people who purchased items who also had adopted and a few donated money because adoption is so close to their hearts. One lady even told her extended family to come back the next day, and they also donated! Ah-mazing.

We couldn't be more amazed by how God worked everything out--from the multiple nearby neighborhood garage sales to the weather to the amount of traffic created by the church and school down the street--it was all arranged by Him. I will admit to worrying (a lot) this week about bad weather and things not selling, but clearly that was all in vain. We in fact had hoped for around half of what we actually raised, so we are beyond thrilled to have reached almost 25% of our end goal of $7500.

We took it easy today to recover from the busyness of our week off (and one of us is recovering from a bad sunburn.)

(Spoiler alert, it was not me.)

Tomorrow, everything will start to go back to normal. In two weeks, Derek has his graduation in Madison, and then we will just slowly be preparing for the start of our home study. Thank you to those of you who have purchased puzzle pieces as well! We are grateful for every single person who is working with us for our little person on the other side of the world! 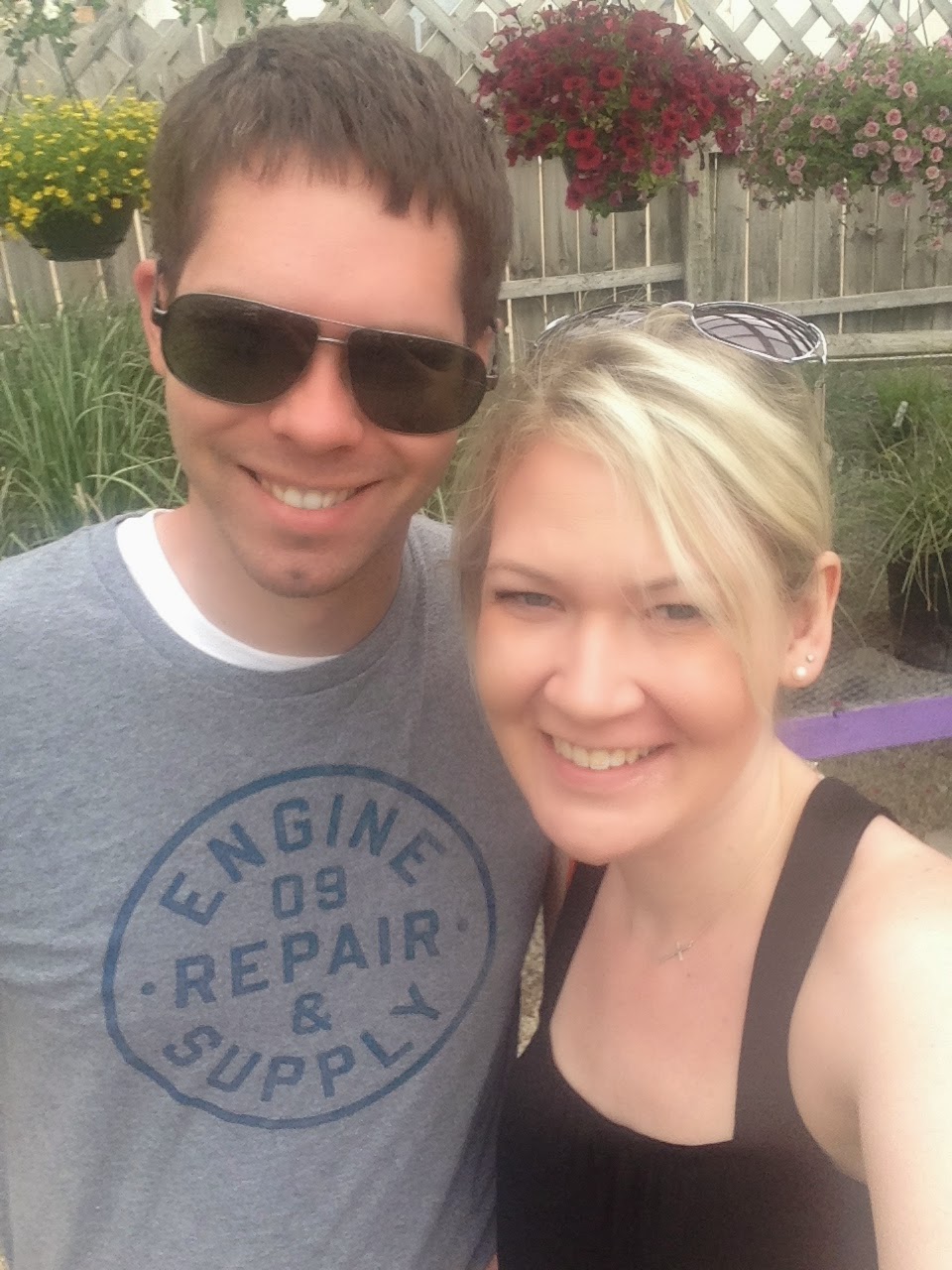 Now to him who is able to do far more abundantly than all that we ask or think, according to the power at work within us, to him be glory in the church and in Christ Jesus throughout all generations, forever and ever, Amen.--Ephesians 3: 20-21