The Updated State (of Things)

So you may or may not remember that in the last blog post, I mentioned that the CCCWA had changed their rules and we would not be able to submit our dossier until Jet turned three in January--which was disappointing but did give us time to save, time to enjoy our family, and basically, just time.

On Wednesday, someone from our agency called and said she had news that was about to make me very, very happy. I was skeptical, because I knew they weren't calling with a file referral, and had no honest clue what sort of news would "make my day, or maybe even my week." She proceeded to tell me that they (our agency) had inquired if their families that were already in process but not yet matched or DTC would still be able to continue on as planned, and the CCCWA said yes! I asked her maybe three or four different times, rewording it just to triple and quadruple check, that we no longer had to wait for Jet to turn three--and no we don't! So yes, that was good news! I texted a friend and she asked how I felt about it, and I said relieved--because I no longer had to worry about timelines but yet we didn't have to rush.

Yesterday, I wasn't feeling well so I stayed offline a lot of the day, but when I finally checked my email late yesterday I actually found out that our "no rush" plan was now obsolete. Per our agency, the CCCWA wants all families who are now grandfathered in under the old rules to submit their dossiers within 3-4 months. That might seem like a lot of time, but it actually isn't...or it isn't if you were planning on sending documents via regular priority mail or ground, not overnight. Our home study visits are complete, but as of the time of that email yesterday we were still waiting on a few documents our HS agency needed to complete before writing.

Fast forward to this morning: we ended up receiving and getting approval on the last few documents needed to complete the home study...but got another email from our agency that said even though our home study isn't complete, they would like us to file with immigration and overnight those documents, like today. (The reason this is weird is because with immigration/USCIS they NEED a copy of your home study to approve you to adopt--so to send things sans home study means a few extra steps as soon as that is done.)

Again, maybe this doesn't seem like a huge deal. And it really probably isn't. But we went from "ok, we'll wait an extra six months", to "Yay! We don't have to wait but no rush," to "GET THIS DONE ASAP YOU NEED TO DO THIS NOW". Almost every time I checked my email, there was another little tidbit of instructions to follow.

I'm going to let you in on a little secret. When plans change frequently, for better or worse, I don't handle it well.

What? I know. This is completely brand new information to all of you.

Last time we did this, we didn't have a two year old (who is currently making elephant noises in his crib instead of sleeping), so we could work on it pretty much whenever--but now we really can't until after 7:30 or we have to take him with if there's a last minute errand--like this morning when I ran a few documents that couldn't be emailed or mailed to our HS agency. That means that last night Derek stayed home to help me make sense of everything and get what we could ready instead of going to a meeting he had at 8:30. And it meant that tonight he stayed home from a work thing to also help with getting documents ready for the first round as well as trying to make sense of the I-800A application and instructions. It makes for tense situations and arguments over the most mundane things, such as, should we notarize today or Monday? Should we do it over Derek's lunch break (right before nap) or after he gets off work (also known as the witching hour--or maybe that's just our two year old)? What are we supposed to write in certain blanks on the I-800A application since we aren't submitting our home study with it? How can we get answers to our questions now that our agency is closed for the day? Why don't you know the answers to these questions? I don't know, why don't you? (I vaguely remember having these arguments last time too.) And where in the world are the dining chairs I ordered from IKEA and why haven't they been delivered? What does that have to do with anything?

Everything just escalates to An Issue. 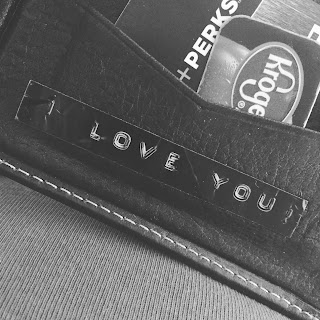 But then I opened Derek's wallet this afternoon because I needed his driver's license number (I can't be expected to memorize everything) and see a label I made with our fancy label maker in the retirement home where I worked in college--he still has it, even though his wallet has changed multiple times, it's not even sticky anymore, and I even got him a replacement copper "wallet card" so that he didn't need it. And it helped me remember that we are in this together. It might be chaotic, but that's life. Honestly, if we got through Jet's adoption, his subsequent tests and surgeries, and really just this past year in general, a little upheaval and rushing around isn't going to hurt anyone. Everything will still get done, and yeah, we might be overnighting things and using couriers instead of using ground service, but in the scheme of things, it's not life-altering. It doesn't change the end goal. If anything, it speeds that end goal up a little bit. 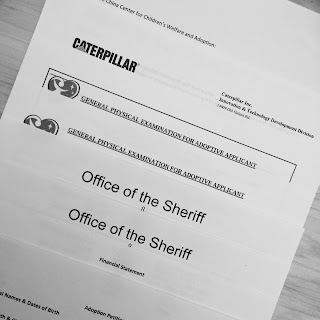 I am happy to report that we have completed all eight documents that are ready for the first wave of sealing. I am also happy to report that we have completed our I-800A application as much as we can (fun fact, there's a rather massive typo/error by the US government on it that we cannot change). The world will not end if we don't send it until Monday to arrive Tuesday. Our home study should be written by Monday, where it will then go to the HS agency director and us to review for errors, and then our placement agency, who will fine tooth comb it at least three times. Things are getting done. We probably will be DTC by the end of October. There's a fairly good chance that with our luck, our fingerprinting appointment at the USCIS office in Chicago will be scheduled during the week we are on vacation, but we'll figure it out. Again, things will get done. 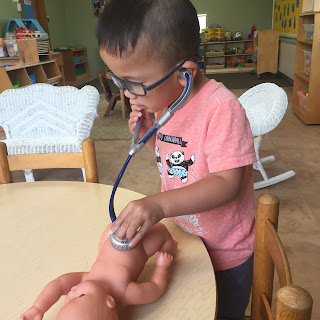 And as I've said many, many times, life goes on outside of whatever issue we're dealing with. As I mentioned before, last time we did this we didn't have a two year old, and this time we do. We may be working on adding a brother or sister to the family for him, but our main focus is still him--as it should be--until we accept a match--and then he gets to share. We don't want the words "in a minute" or "maybe later" to become the norm in this house. So that means yeah, paperwork gets put aside, we watch "Lots and Lots of Trucks" on Amazon Prime so much that we hear it in our sleep, we do puzzles, we swim, etc. After a lot of thought, we decided Jet really needed some sort of structured social aspect in his life, so he's starting two year old preschool (which is way more intense than I thought it would be) in less than a month. He is absolutely going to love it, and they have a doctor's kit AND a PomPom (panda) so how could he not? Most importantly, school will be "his thing" and will also give me and/or Derek one-on-one time with our new son/daughter to help with bonding and adjustment.

So. That's where things stand. Our T-Shirt campaign is over, but the link should remain live if anyone still purchases. Our garage sale with our good friends is still scheduled for August 11/12. For our praying friends, we ask for these specific three things (in addition to our son or daughter, whomever they may be):

1) Finances. Due to an even faster dossier completion we will be sending the money sooner, so wise decisions on that.
2) Good weather for the garage sale--no rain, and definitely not 100+ degree weather or heat indices.
3) Pray for a traveling companion for (probably) Derek for when the time comes. If at all possible, we don't want to leave Jordan home for two weeks and then completely disrupt his life even more with a new sibling.

Thank you to those of you who ask how everything is going and ask questions about the process. It means a lot that you try to understand more what we're working on/toward. I know I used a lot of acronyms in this post, and I'll explain more about the process later--something I meant to do last time but did not. Thank you all, as always, for your support. We appreciate it more than you'll know.

Posted by Unknown at 8:03 PM No comments: