Peace on Earth, Good Will to Men 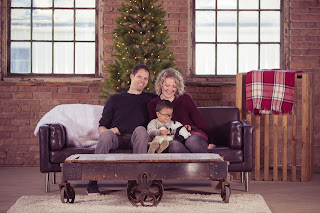 Merry Christmas from the Tanii! Christmas cards may or may not be coming. It's been a hectic month or three. Can you believe that two years ago we told our families at Christmas that we were beginning the adoption process? Maybe it seemed like it dragged at times, but Jordan is definitely here now, even if sometimes we still can't believe it.

I've always loved learning the history to some of the more popular hymns. This year especially, I can't help but think of the song I Heard the Bells on Christmas Day. It's a popular story, and so you can tune out the next few sentences if you want. Based on a poem by Henry Wadsworth Longfellow, it was written after the death of his wife and a serious injury to his son during the height of the Civil War and later revised and set to music in the 1870s, which was the traditional lyrics and tune that is still sung in most churches today. I personally happen to like both of these versions (below) a tad better, each for a different reason. The melody we are familiar with in our hymnals always seems too bright and cheery, especially considering the words to the second verse.

There have been hospital stays, tests, unexpected health issues, job concerns, deaths in the family, etc. But I can't limit it to just our own family of three, or even our extended family. Even this Thanksgiving and Christmas have been different as we have spent the majority of the two holidays with just the three of us home, keeping Jet as healthy as possible. However, it would be unfair to consider that the world revolves around our little family. The world gets smaller every day I've heard--truer words have never been spoken. There's been political divisiveness, racial tension, terrorist attacks. There's the refugee situation in Europe, the ongoing crisis in Aleppo. There's the persecution of Christians by ISIS. I think our friend Henry would probably come up with the same words in 2016 as he did in the 1860s. 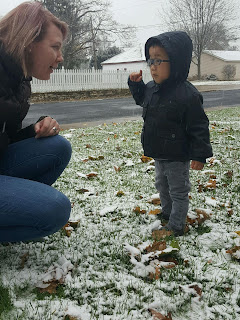 When we first brought Jordan home, his pediatrician wanted us to check his hearing because sometimes heart defects and hearing loss go hand-in-hand. Actually, we never followed through with the referral because it soon became clear to us there was absolutely no problem with his ears. We live within walking distance to four different churches, so depending on the distance from our home, we are able to hear them every hour, half hour, or quarter hour every day, and usually Jordan is the one to point them out whether we are inside or out (although you ask him to pick up his toys and he can't hear you at all...). We hear them in the hospital chapel, or from the storefront bell ringers. Jordan has an obsession with them...but nothing was quite as exciting as our first snow this year and hearing the bells. You have to admit there is something magical about snow falling and church bells ringing.


with peace on earth goodwill to men

Like I mentioned in in our last post, it's all about perspective. In the grand scheme of things, we have no reason to complain and every reason to be thankful. And so I'll share some of the things that have brought us peace, joy, and hope this year and Christmas season. Many of Jordan's doctors and nurses have asked to pray for or with us before or after a procedure or test. I don't know about you, but that's not something I expect anymore. Friends and family coming around us during a crisis--hospital visits, meals, etc. Having Jordan open presents and saying "thank you" (or his equivalent of a Chinese/English Xie Xie/Thank You) without being prompted--parenting win although that should really be credited to his Morning Star Family. Having family understand that things are different for us right now, and with no questions asked dropping everything to drive down to help or rearranging their schedules to accommodate us. Knowing that Jordan's a healthy boy who just needs a little "maintenance" (and really, don't we all?) Maybe most of all--having our son, who has only known us for six months, give big hugs and I love yous when one of us comes home. I'll take that Christmas gift. 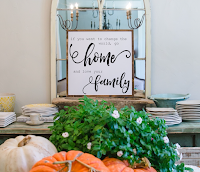 Recently, I purchased this as a reminder to us. It reads If you want to change the world, go home and love your family.--Mother Theresa. This is not my house by the way--not even close; when I say I recently purchased this I mean two days ago and it just shipped yesterday. You can buy this (along with many other fun items) here. But I think the lyrics "the wrong shall fail, the right prevail" can only start at home. So hopefully, we will pass on goodwill and peace toward men as we go along at this crazy thing called parenting, and maybe you can join us in our endeavors. Looking forward to this New Year coming soon and everything it brings!

Merry Christmas again from the Tanii. Love to you all! 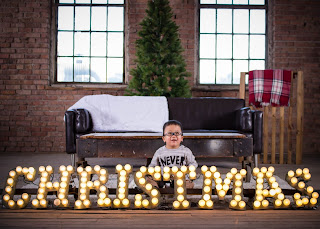 Posted by Unknown at 8:42 PM No comments: